As one of the only Queen Anne style churches in Birmingham the Church of the Ascension’s history is rich and varied. Founded by Job Marston, a local philanthropist, we celebrated our 300th anniversary in 2004.

Born in Hampton Curlew, Budbrooke, Warwickshire. His father Walter was a Governor of the Yardley Charity Trust . Job joined him as a Governor in 1660, aged 24 years, and stayed as Governor until 1684 and then took up residence in Hall Green Hall until his death in 1701. He had no immediate family and lived during a turbulent period of English history- 4 monarchs, a Civil War, 11 years of Commonwealth and the Revolution of 1688!

His parish Church was St Edburgha’s, Yardley, then in the diocese of Worcester and he travelled several miles over rural countryside, from the hamlet of Hall Green to worship at his local parish Church.

His will of May 1701 , he died a month later, he left money and lands for charitable trusts and a large bequest for the building of a chapel, chapel yard, and maintenance money for a chapel minister.

Job’s Marston’s hatchment, large diamond in shape, hangs on the north wall. Possibly used in the funeral procession, hung from the residence and laid up in the parish Church. It has the Marston coat of arms, and relates :

“Marston of Hall Green” and the motto (in Latin) “Rest in Heaven”.

The Church and dates

On Ascension Day 1704 the Chapel was consecrated by the Bishop, the first Church in this leafy area of Hall Green. The building is a good example of Queen Anne style, and was probably designed by Sir William Wilson, or at least influenced by him. Originally the building was of a more simple structure, concluding just before the end of the present nave. Hence the building looked much like a chapel, with distinctive cupola and balustrade surrounding the top of the building.

Later on , in the 1860’s the transepts and chancel were added, and now the building has a cruciform shape , as viewed from above. The extension also included the East Window which has a scene of the Risen Christ with an angel and the terror-stricken soldiers, the tomb guards.

In March 1907 The Chapel became known as the Parish Church of Hall Green in the new diocese of Birmingham.

In the 20th Century there was significant Church growth in Hall Green and seven other churches became established within which there is a strong associated of Churches working, witnessing and worshipping together. So in 1954, at its 250th anniversary the Church was rededicated as “The Church of the Ascension”

You may be interested in following links which feature our history

Wikipedia – Church of The Ascension

A History of Birmingham Churches 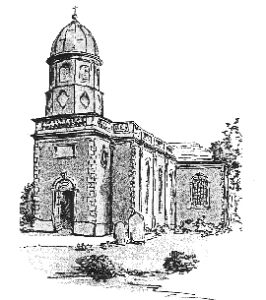 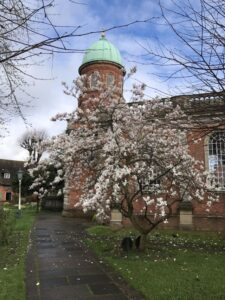